It's David at AceFrehley.com, & I spent this past weekend helping Ace clear out his storage warehouse for all New Anomaly Touring gear. We found a bunch of rolled up 1989/1990 Trouble Walkin' Posters and I decided to get Ace to autograph them so we can get them on the merch page for you guys.... Check out the pics below.... There's only 30 pieces of each, so act fast.... I didn't see any more of these posters. This is it!!...... A large number of fans have written to the website requesting signed Ace 8 X 10 pictures, so we added 50 of each of two different photos (see below).

Thanks for supporting Ace Frehley & keep tabs on the website for cool announcements about the release of "Anomaly"........... 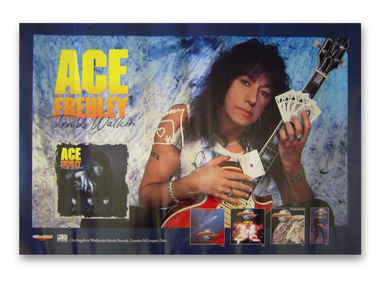 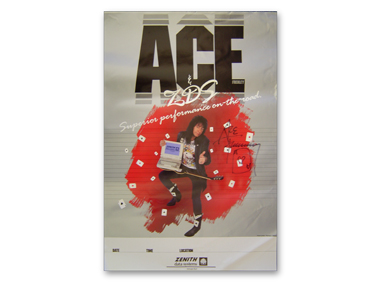 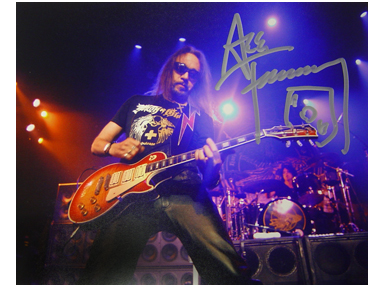 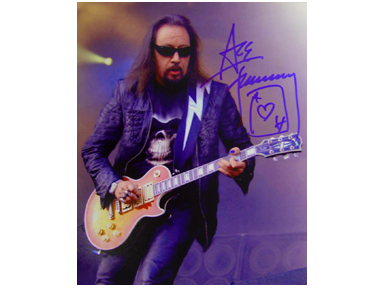 
06/15/09
Earth People!!!
How are you?......I'm happy to say that my new album "Anomaly" is finished!
Mixed, mastered...Done!!.........It clocks in as one full hour of new music.........I'm waiting for my distribution company to get me solid release dates that we can decide on. I want "Anomaly" to be available to you in every store around the world that sells cds these days (and that number is shrinking). Digitally, "Anomaly" will be available on iTunes (with an exclusive bonus, album only track!!). Believe me, as soon as we decide on the release date.....you'll be the first to know. But for now, here's the "official" track listing for "Anomaly"........Talk to you soon.......

Watch for new merchandise coming soon. We will be retiring most of the current merch, so go get 'em while you still can!!
http://www.acefrehley.com/two-sides/

05/15/09
Here's a short clip of the encore of the Right Turn Benefit Concert I did in Boston a few weeks ago........ "Rock And Roll All Nite" performed with one of KISS' inspirations in the early days, Alice Cooper!!...... It was an honor to share the same stage with you Alice!!.....
http://www.acefrehley.com/rocket-rides/


05/08/09
Here is another clip from the gig in Boston with the Supergroup!!!!...... My thanks again to the Right Turn Organization for inviting me this year & to Ricky Byrd for orchestrating the music......... if you would like to contribute here\'s the link: http://www.right-turn.org/.....
http://www.acefrehley.com/rocket-rides/

Even more vids from the show in the next few days.......Stay tuned!!


04/27/09
Photos and video from the benefit show will be coming soon..... in the meantime here is a review from the kissasylum.com website
Ace Review From Right Turn Supergroup Boston Concert
From: Christopher F. Allin
Posted: April 27, 2009
Ace Frehley was second on the bill last night in Boston, MA for the benefit concert held each year for the RIGHT TURN drug and alcohol treatment organization. Although the event was headlined by Alice Cooper (27 years sober), it was just as clearly an Ace crowd.
On Saturday, in a second location in Cambridge (right near Harvard University) Ace, Alice, and the other members of the SUPERGROUP backing band rehearsed for three hours. Lucky radio station winners watched an hour of it, and received autographs from everyone.
Frehley brought the Berkelee Performing Arts Center audience to their feet yesterday as he played through a hot set of his KISS classics -- opening with NEW YORK GROOVE, then explaining his near death experience which inspired SHOCK ME, then saying, "I know this (concert) is for recovery, but everyone always wants to hear this song." Ace then brought loud cheers when he remarked that "I don't drink anymore." Of course the next song was COLD GIN, complete with the guitar hero poses Ace first made famous on the cover of KISS ALIVE! in 1975.
Ace was in Boston to help raise money for RIGHT TURN, a drug and acohol recovery program founded by Del Fuegos drummer Woody Giessmann. RIGHT TURN is oriented towards performers of all kinds -- musicians, comics, etc. Next year RIGHT TURN plans on going nationwide, opening treatment facilities in Nashville, New York City, and Los Angeles, to complement their Boston office. Go to rightturn.cmarket.com/SUPERGROUP for an auction with autographed collectibles, including some signed by Ace himself. One item up for bid until May 4th is a guitar signed by all the performers from last night. All proceeds benefit RIGHT TURN's recovery efforts.
Ace looked great, with metalic nail polish which perfectly matched his blue guitar, dark sunglasses, black T-shirt, and leather pants. The Biker look works very well for Ace (much better than for Gene during the Revenge era). Taped to his mike stand were glow-in-the-dark 'city picks' left over from the 2000 Farewell Tour (My brother caught one from Ace with LONG ISLAND printed on it, then later got one from guitarist Ricky Bird with EVANSVILLE, IN printed on back).
After Ace's songs, Alice Cooper came out, sounding great, even though his voice was mixed a bit low. It's quite a treat to hear Cooper sing BROWN SUGAR as well as all his own classics. For the encore, all the musicians who played that evening came out on stage to sing ROCK N' ROLL ALL NIGHT; but first Alice emceed everyone singing HAPPY BIRTHDAY to Ace, complete with candles on a cake, to a smiling and slightly embarrased Frehley. It was a great evening, ending with Ace shaking hands with everyone in the front of the stage, which swelled considerably after he returned for the encore.

04/23/09
I want to give a big "Thank You" to everyone at Gibson USA & Gibson Custom in Nashville for your warm hospitality during my visit today.......With all the TLC you put into every one of your guitars, it's no wonder Gibson has the reputation as the best guitar manufacturer in the world!!!......It's truly amazing!!!!!!!..........We're putting the finishing touches on my new Signature model guitar, so keep checking AceFrehley.com for details..............Next stop.......Boston


04/14/09
For those of you who missed the 2008 Ace Frehley Rocket Ride Tour, this is your chance to get exclusive Rocket Ride Panties. Personally inspected by Ace himself.
http://www.acefrehley.com/two-sides/

04/08/09
Here is a press photo from the Yankee Stadium, Hard Rock Cafe opening. Ace, Bernie Williams, and Darryl McDaniels (Congrats to Darryl for the induction to the Rock and Roll Hall of Fame)

03/30/09
Ace wanted me to let you know about an exciting week he's got planned for you, starting with All-New Merchandise arriving today into The Official Ace Frehley Store!!!! Also, check your email in the next couple of days for Ace's first ever video blog AND..... this Thursday, April 2nd, the Hard Rock Cafe will open at the New Yankee Stadium, and guess who's showing up?? Ace Frehley!!! This event will feature the SpaceMan from the Bronx backed by Scott Ian, Frank Bello & Anton Fig performing the classic hit "New York Groove". This grand opening is unfortunately closed to the public.... BUT, get all the pics here at AceFrehley.com.............

Know Where You Go

Ace will be performing 4 of his songs with the supergroup and wanted me to remind you guys that tix are ON SALE NOW for the Sunday, April 26 Benefit Concert in Boston with ALICE COOPER, SIMON KIRKE (Bad Company), CHAD SMITH (Red Hot Chili Peppers) & many more!!!! It's for a cause really close to Ace & he'd love to see all of his friends there! You can get all the info on the concert on the GETAWAY PAGE & purchase tickets directly at the link below:
http://www.ticketmaster.com/Alice-Cooper-tickets/artist/734811

Also, TIN MAN Merch, our exclusive online store, wants to inform everybody that they are down to the last 50 LAMINATES Signed by ACE!! And less than 100 ROCKET RIDE 2008 Shirts are left (XLs are gone!!) Once they sell....that's it.
http://www.acefrehley.com/two-sides/

And finally, I'd like to ask you guys to help spread the word about AceFrehley.com. Everyone receiving this email is already signed up, but if you can tell your friends & fellow Ace/KISS fans to sign up as well, this way we can give you all of Ace\'s ANOMALY info FIRST!!! New videos, track listings, appearances & brand, and new Ace Merch is all coming very soon!

02/10/09
Here's a clip of a song I rarely play live...Wiped Out was co-written by my good friend Anton Fig. Anton played drums on my '78 solo record, the solo stuff in the '80's, and I'm proud to say Anomaly too! You can see him every night on the skins on the David Letterman Show. Hard Times is off Dynasty... Check it out on the Rocket Rides page!!

01/27/09
Thanks so much for the great response to the Fractured Mirror Jam...

It was fun to do, maybe I'll email out more studio footage in the future.

I found a copy of my Just for Fun Tour in '92 shot at a cool venue called the LimeLight in NYC. It was an old church converted into a night club. Here's a version of Torpedo Girl off the KISS record Unmasked.

By the way, my band members at the time were Sandy Slavin (drums), James Lomenzo (bass) & Richie Scarlet (rhythm)...

01/23/09
Here's a video clip of the Fractured Mirror Jam Derrek & I messed around with during the holidays.

During one of the sessions, we took a break, I gave my studio assistant my camera and jammed out this tune from my '78 solo record. The picture's a bit dark, but that's the vibe I like during recording....

01/05/09
Happy New Year and Welcome to 2009!!! I'm in the studio putting my finishing touches on the long awaited new CD! It's titled "ANOMALY" and here's a sneak peak of the cover art I promised to unveil to everyone! As soon as I get the track listing set, I'll email it to all of you who signed up before it goes public...And thanks again for your patience...

First off, I want to send Happy Birthday Wishes to my Original Partner In Crime, Peter Criss...
God Bless You, my brother...

Next, I want to thank Eddie Trunk & everyone at Q104.3 for inviting me to their annual KISSMas Special. I had a blast talking to all of you who phoned in. If you didn't hear the broadcast, I announced a few news items that I'm sure will peak your interest. On Monday, January 5th, right here on AceFrehley.com, I will reveal the cover artwork & title of the new record. I designed the cover & I'm going to tweak it a bit over the holidays before it goes public.

Also, Derrek Hawkins & I took a short break in the studio last week & fiddled around with Fractured Mirror. I turned my video camera on & filmed it. It came out looking & sounding real cool for something done quickly & "on the fly." I'm going to be sending it out in an email next week only to those who have signed up on this website. So, if you haven't already, sign up! Consider it an early Christmas present...

12/17/08
I just confirmed that I will be appearing along with my guitar player Derrek Hawkins (ex-Stabbing Westward) on the Original Merry KISSmas show This Friday. The show airs 11PM-2AM EST live on Q104.3 NYC and online at www.q1043.com.

12/15/08
You can catch me this weekend on VH1 Classic's THAT METAL SHOW hosted by my friend Eddie Trunk. I'm told that it premieres this Saturday night Dec. 20th at 11pm. It's suppose to repeat several times in the upcoming weeks. VH1 Classic was cool enough to send me all the times it's gonna repeat. Check it out the Getaway page!!!

12/15/08
My Merchandise Page called Two Sides of the Coin is going up on the first couple of days of '09. I'm cleaning up my store room of Merch from last year's Rocket Ride Tour. Here's your chance to get t-shirts, guitar picks, backstage passes (designed by me) and other stuff that are out of print & will be unavailable as soon as the last one is sold.